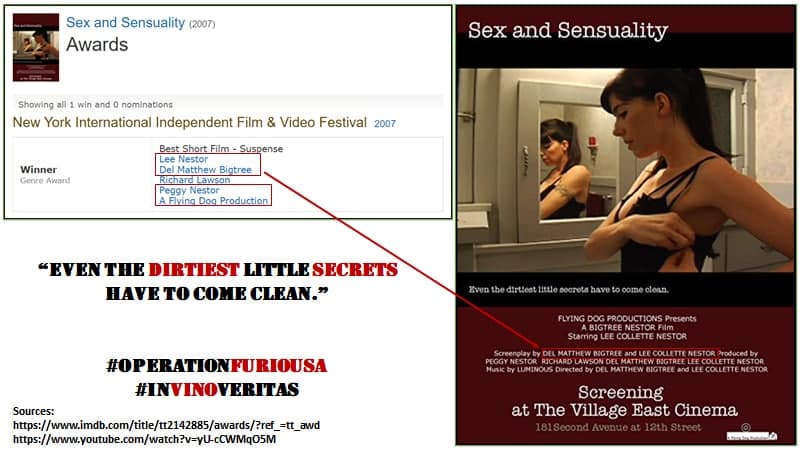 Del Bigtree and Lee Nestor co-directed a short film entitled Sex and Sensuality (2007). The tagline is, “A woman undresses for a bath and uncovers a dirty little secret.”

What other films like this do we not know about?

What was their motivation to direct a film about sex and sensuality?

Who is Peggy Nestor?

Why did Del Bigtree produce a film with Richard Lawson, an actor in the movie Poltergeist (1982)?

Even the dirtiest little secrets have to come clean.

Notice this mini-movie got an award not for stupidest 3-minute movie, but for “Best Suspense.” Only in the Land of Jew can things like this happen. 90% of actors are secretly Jewish. Why? Award offering institutions are wholly Jewish. Why’s the Land of Jew network doing this? Let’s examine the Bigtrees:
(1) You are Jewish if your mother is Jewish, not your father.
(2) Del’s mom started her career at age 4. I kid you not. Singing in a Broadway musical, no less. Plus all her sisters. 200+ performances plus London, BBC expose, her plays are part of school curriculum… the Land of Jew network in play.
(3) Del’s mom claims to be half Indian. Well, so does Cher, who is actually Armenian with a Jewish mother. Zero Indian blood. So this trick is used by Jews to infiltrate Christians.
(4) Del’s father is Jewish.
(5) Jewish men marry Jewish women, which shouldn’t surprise anyone.
(6) Del’s mom is Jewish as her mom was Jewish (Mary Wolniak)
(7) So Del is Jewish. This is profound as he’s plugged into Land of Jew network.
(8) Peggy Nestor is also Jewish & appears to be mother to Del’s GF. Peggy & her sister are scam artists who magically won a court case to get Oleg Cassini’s (Jew) mansion. See link below.
(9) Del’s father runs a fake religion “church” that tried to get a drag queen to preach there. For 4 yrs in a row, his church won “Best Place to Worship.” Land of Jew network.
(10) Del hides his Jewish background & his father’s fake church by using his mom’s maiden name. Of all Del’s siblings, only he does that. Why?
(11) Del & girlfriend/wife Lee Nestor take active part in this fake church all the time.
(12) This fake church (Unity Church) gets special guest speakers from the Land of Jew network: Steven Pinker (Mr Language Proves Evolution). So how does a half-baked fake church get the likes of evolution expert Steven Pinker to come there to “preach”?
(13) Del claims to be a hot shot producer with “Doctors” & “Opra.” Yet his “Award-winning movie” is crap. He’s been pumped up by the Land of Jew network.
(14) Jokes with curse words & sexual connotations used to be called “Jewish Humor.” Now it’s called “comedy.” Jews run entertainment for a reason.
(15) Jews worship the Babylonian Talmud. In it Jesus spends eternity in a fiery lake of feces, goyim are lower than animals & only good for slaves. Lying is fine, too. All witchcraft & Satan worship spring from this book. Let that sink in a moment…
(16) Del is just one of the many agents working towards fulfilling the Babylonian Talmud’s prophecy of enslaving all goyim. Jesus is their enemy as are all who worship Jesus.
(17) Entertainment in Latin: “enter” = “go in”; “tain” = “occupy”; “mente” = “mind”
https://nypost.com/2018/03/17/fashion-icons-widow-wins-decades-long-eviction-war/

great detailed research there… interesting that he is jewish too?

interesting that his bio is so mysterious, if he was really on our side, you would think the cia would have exposed all this dirty little secrets but they have not; there is no information on his wife, or if he is marries; or even relationship status his age and bday are also not mentioned, no birthday celebrations on social media… he grew up in boulder CO. i wonder is there is any connection to the big boulder fire that ravaged that town on 1/3/22…? are his parents still alive, did they live there? or have a house? his father was a Unity Boulder Church minister? hm…

it seems his father is still the UNITY CHURCH PASTOR, a very embracing diversity church, if you know what i mean… Jack Groverland aka as the minister emeritus? the ordained pastor… and his mom is still director and minister emeritus… INTERESTING BUNCH! https://unityofboulder.com/staff/

Was Del Bigtree an Adult filmmaker in 2003?

The Great Virus Lie!
Scroll to top
We use cookies on our website to give you the most relevant experience by remembering your preferences and repeat visits. By clicking “Accept”, you consent to the use of ALL the cookies.
Cookie settingsACCEPT
Manage consent