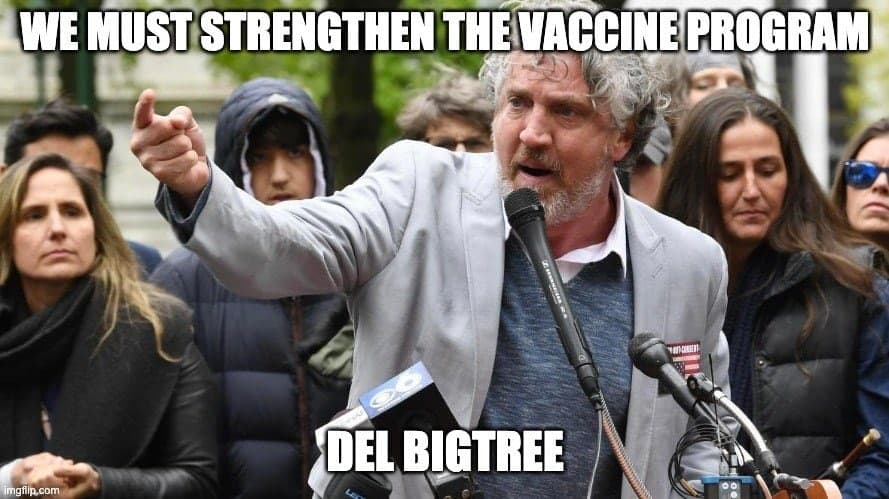 In their 2017 letter to HHS, your heroes Del Bigtree and RFK Jr. said that they want to “strengthen the vaccine program.” Those are THEIR words, not mine.

“HHS can do better. With hundreds of faccines in the pipeline it must do better.”

Ahh yes, exactly what we need. More/Better Government. Where does Del and RFK Jr. propose we find these Angels?

“Children susceptible to vaccine injury are as deserving of protection as any other child. Avoiding injury to these children is not only a moral and ethical duty, but will in fact strengthen the vaccine program.”

As we can see from their own words, none of these sharks want to take down Big Pharma or the Vaccine Industry. They want to STRENGTHEN the vaccine program! There’s no need for conspiracy theories here, these are THEIR WORDS. So why not take them at their word? They’re not lying, they’re telling you the truth.

Let’s just make sure they’re safe, okay? So what will happen once the scientists prove they’re safe? Well, then now we can make them MANDATORY! What’s the problem, we all know the faccines are safe now, thanks to our heroes in the soft “less dangerous faccines movement!”

Now, why would any reasonable parent go to the SAME PEOPLE who are responsible for their child’s injury, for protection?

“Every parent that does not witness their child suffer a serious reaction after vaccination, such as a seizure or paralysis, is another parent that will not add their voice to the growing chorus of parents opposed to HHS’s vaccine program due to safety concerns.”

You see? None of these folks are willing to educate the public about the root of the problem which is that so-called “viral diseases” like Polio and Smallpox aren’t caused by Viruses, they’re caused by TOXICITY – in some cases DIRECTLY FROM THE FACCINES. This is why they use these caveats when they make these statements – in this example, the caveat is “due to safety concerns” …

Another caveat and deception can be found in the phrase “parents opposed to HHS’s vaccine program” – this is how they create the illusion that parents aren’t opposed to faccines. Faccines are generally good! They save lives! They’re just opposed to HHS’s program. If we change the program, everything will be fine!

If they were legit, then they would cut the head off of the snake and inform the entire world that Polio wasn’t caused by a Polio virus, but they don’t do that. Because if they did do that, then that would undermine the entire CONCEPT of a Faccine. But Faccines make millions of dollars for these deceivers, so they’re fully invested in the lie of viruses and Faccines.

Are we to believe that Del Bigtree and RFK Jr. (America’s Leading Voices in the fake “Anti-Faccine Movement”) haven’t read some of the books about the real causes of Polio and other diseases? They haven’t read The Moth in the Iron Lung? They haven’t read Murder By Injection or any of the other dozens upon dozens of books on these subjects?

Well, either they haven’t read these DOZENS of books – which makes them misinformed and useful idiots for Big Pharma and the Chemical Companies, or they HAVE, which makes them LIARS AND DECEIVERS.

The powers that be aren’t stupid, they control both sides. That’s why you should always skip door numbers 1 and 2, and go straight to door number 3.

When we understand that these illnesses are not caused by viruses, then we also understand that faccines are a scam. They can’t have that. So they will create all sorts of illusions to keep that hidden from the public.

Right. Let’s rely on HHS, a corrupt Government Agency, to protect our children! Maybe we should give more power to the EPA to protect the environment while we’re at it, as well. What a god damn joke.

So when will HHS perform these “vital statutory obligations” regarding vaccine safety? There is no such thing as a safe faccine. How do you make something that Congress declared as “unavoidably unsafe” – safe???

And when will we have this “frank conversation” – since when do “conversations” solve problems? How many years of their “soft-serve” activism have gone by without a single, tangible result? As far as I can see, all we have is MORE FACCINES! What have the so-called lawsuits accomplished? I can write a letter to HHS in 30 minutes. Big fucking deal. A letter. These grifters are collecting millions of dollars from people all over the country to write letters and file meaningless lawsuits. Empty promises, fake heroes.

Yes that’s right, I said meaningless lawsuits. Like the recent lawsuit that they won which forced the CDC to remove certain language from their website. ICAN declared it as a victory and a win for the people. Really? Removing words from a website? THAT’S YOUR BIG ACCOMPLISHMENT?

And how many more years will we allow these false prophets to lead us in their never-ending fight for “less dangerous faccines”?

“Nor will children injured by faccines be able to access the services they need.”

Here’s an idea… how about we stop giving any faccines to all children across the world immediately, and then they won’t need your “services” ?

I have a better idea – How about we burn the whole system down to the ground and throw all these assholes in prison?

Good insights I never connect the dots before. Good logical revealing questions I never ask before. Thank you Greg for your gift of discernment and taking the time to document them to share with those of us who are open to hear and see beyond the veil.

I’m sorry to know about your children’s faccine injuries. I can see why you have such insights and passion to expose lies. Praying for you and your family 🙏

Your work makes me realize that small citizen journalism is usually the most trustworthy despite no fancy platform. I’ll give my attention to them more and move away from mainstream “truth” media moving forward.

Thank you again for your hard work to expose darkness and guide people the right path! Prayer and blessings to you! 🙏 🙌

Wakefield and his Patent

Monetizing Misery – Andrew Wakefield
Scroll to top
We use cookies on our website to give you the most relevant experience by remembering your preferences and repeat visits. By clicking “Accept”, you consent to the use of ALL the cookies.
Cookie settingsACCEPT
Manage consent