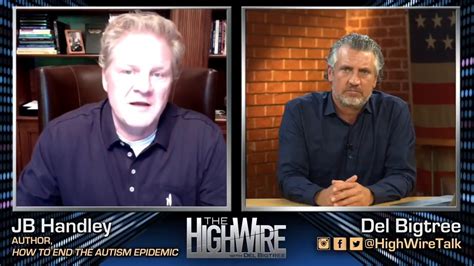 This was the event that awakened me fully that Del Matthew Bigtree was something totally different than he portrayed! Endorsing another pro-vaccine shyster, no other than his partner J.B. Handley, who actually endorses certain vaccines??? People still can’t get it. Do you???

I listened to Del the first time because TruNews covered his show on one of their shows about covid. So I checked it out and started listening just to see what Del was all about. My gut told me from the start that Del was a conman, but I wanted to give him the benefit of any doubts. I started listening to the shows and participating in the comment sections of the show segments they post. At first it was going good, there seemed to be no censorship, and judging by all the likes I was getting on my comments, I seemed to be connecting with like-minded people and that was encouraging.

Del asks for donations based partially on the promise that he doesn’t censor people, and at first I took him at his word, but that didn’t last very long. They changed the website to a format from hell, designed with the sole purpose of censorship in mind, and what seemed like a good thing, turned into a website that censors worse than the MSM ever did. (and they censor a lot)

My dad always used to say that a person who will lie to you about one thing, will lie to you about anything, so my opinion of Del, based on his lies about censorship, took a nose dive. I continued to try to participate, (still do) but Del and his crew make that very difficult for me. He has a crew of people who are his core followers that he uses for attack dogs, constantly badgering anyone who disagrees with Del.

Speaking about his attack dogs, when I first started participating in the website about a year or so ago, there’s a live “chat” on each of his new episodes, where you soon learn that there are a group of his supporters who try to dominate the board. I mingled with these people who seemed to be on his chat 24/7 to see what kind of people they were. I learned that Del’s inner-circle is made of of people who call themselves “vegans” and are avid abortion fanatics, who make the claim that it’s morally worse to kill a hog (pork) than it is to murder a human child in the womb, because the pig has a fully developed nervous system and the child in the womb does not. I know that sound bizarre, it sure did to me anyway, being the first time I ever heard an abortion fanatic go that far, but I swear to God, over the grave of my mother and father, that they were pushing that on his website.

I soon learned that Leigh Dundas is also one of his groupies, (or he, her’s) and she’s the terrorist who incited the so-called Jan 6 capital riot. Scientologist Infiltrates Clay Clark’s ReAwaken America Tour (trunews.com) Go to 1:08 in this clip to see for yourself.

Anyway, I’m not surprised about the things I’m learning about Del, it just hurts me to see that people in this country are so evil.

Thank you for your intelligence on this matter. You’re correct Dell is a class a con man. I discovered his shysterism back in 2017 and spent literally thousands of hours investigating him and 200 of his followers. Every time I find something and post it his minions would come after me with their cans of gasoline gaslighting me and narcissing my messages. You’re dividing the movement you’re crazy over and over and over. Yes what seemed like a good thing was just a class exploitation of vaccine injured and dead so he could exploit them deeper and line his pockets with blood money. No one ever pays attention to the work he did before he joined the pharmaceutical bandwagon on those two TV talk shows. That goes over people’s heads too. He was the executive producer of homeless real world look it up. The exploitation of homeless people for fun and profit. It just goes on and on and on but again thank you please share and stay vigilant. Time is short sees the moment may God help us. And Dell has some serious consequences for what he’s done and deserves each one of them.

Thanks for what you do Greg. You know Bigtree a lot better than I do, and I’m not surprised by anything you say, it all fits perfectly. The fight for truth and justice in my experience is painful, and a lonely place to be most of the time, but it’s people like us who have always made a difference for the better in this world, and there’s a very good chance we will never be recognized or rewarded in this world, for knowing all along, what most people refuse to listen to about this unconscionable conman and shyster who surrounds himself with morally bankrupt pettifoggers and much worse.

Weston’s Vaccine Records
Scroll to top
We use cookies on our website to give you the most relevant experience by remembering your preferences and repeat visits. By clicking “Accept”, you consent to the use of ALL the cookies.
Cookie settingsACCEPT
Manage consent