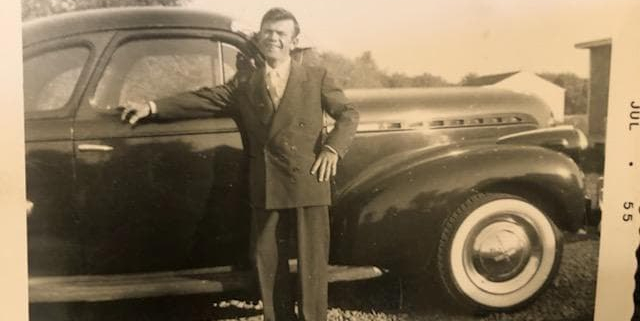 In 1927, the US Supreme Court case BUCK vs. BELL set illegal precedent that states may sterilize the inmates of public institutions. At the time, entire families and children were being seized out of their homes that have committed no crimes. Actually, their crime was being poor. Or, simple petty crimes, such as stealing a loaf of bread to feed your family could get you a lifetime of incarceration and sterilization with no due process and no chance of ever leaving. Many of these people were placed in homes for the feeble-minded, or other state-run institutions where they were used as slave labor by the local municipalities. They sterilized them under BUCK vs. BELL because they believed that being an imbecile, epileptic or feeble-minded was a hereditary thing and the inmate should be prevented from passing these defects on to the next generation. My father, Herbert Wyatt, was someone that had done nothing to deserve his fate. However, if this misfortune had not happened to him, I would not be here to tell his story.

Oh my God! is all I can say. Bless your father. Thank you for sharing this incredibly moving true story. It is heartbreaking.

Thank you for sharing your father’s story. It’s beautifully written and heartbreaking, made all the more tragic by your father’s everyman potential– or what should have been an everyman story. He was robbed of his dreams by a predator class of elitists who think they have the right to play God.

I am writing a book about Central Park in New York City. I’m a retired botanist and my book is mostly about the pre-park topography and ecology. But I am including a chapter on Frederick Law Olmsted, the man usually credited with creating the park. He did help design it and he was the project manager during the early years. But his main job was as PR agent, based on his journalistic career writing about the south for the New York Times. Olmsted was hostile to religion–I’m not sure we can call him an atheist– and he identified and socialized with the transcendentalists like Emerson, Thoreau, Longfellow and others who were definitely atheists. He was also firmly embedded in the intellectual, political and financial ruling class of New York City, Boston and Washington, DC. One of his best friends since childhood was Charles Loring Brace who was one of the many “social reformers” that acted like they were God’s gift to humanity and had the right to organize society and tell others how to live their lives. Brace was the founder of the Children’s Aid Society, a “charitable” organization supposedly concerned with the welfare of children. His idea of charity was to round up “orphan” kids from the streets of New York and other cities and ship them off to families in the Midwest who contracted for their maintenance and labor. From 1854 (three years before Central Park was started) to 1929, over 200,000 mostly ethnic “orphans” were trafficked out of eastern cities.

You and your audience will not be surprised to learn that most of what we read and hear about the creation of Central Park is fake news, hiding the real story of what and who was/were there before and how and why it came to be. I believe it was one of the early social engineering projects and a forerunner of the eugenics movement.

Which brings me back to the story of your father, Herbert Wyatt. With your permission, I would like to include his story in my book under a section about 19th century social engineering and how the next generation of social reformers became the eugenicists that sterilized your father and stole his future.

I admire all your work, including your faithful support for people in recovery.

Thank you Greg Wyatt for your for your sisters moving story of your father. The predator class has moved to control of the entire world now.

I didn’t want cry, i wanted to just listen and hope it was a happy ending. I am sorry, I could not stop crying and my heart broke knowing his story. Your father was a great man, despite the rejection and abuse. I am sorry he died alone. i am sorry he didn’t share his story earlier. I am sorry this evil gov. is got away with so much and is doing it again. I am sorry. God bless and much love to you and your family.

Maybe there is More to Johnny Depp?

Central Park
Scroll to top
We use cookies on our website to give you the most relevant experience by remembering your preferences and repeat visits. By clicking “Accept”, you consent to the use of ALL the cookies.
Cookie settingsACCEPT
Manage consent